A fast and easy way to read multiple sensors from a Raspberry Pi. The Tentacle T3 eliminates the need for wiring, multiplexing and electrical isolation. Because it comes in a Raspberry Pi HAT form factor, it simply plugs into your Raspi. No wiring, no bread boards.

The Tentacle T3 is compatible with Raspberry Pi 2, 3, 4 and Zero.

EZO Circuits are not included.

The Tentacle comes with an M2.5 standoff mounting kit.

You can also stack other HATs (that are not stackable by design). For them, the Tentacle is mostly transparent. The Tentacle doesn’t “occupy” any pins of the Raspberry. It’s connected to 5V, 3.3V, GND, SCL, SDA. The Tentacle adds pullup resistors to the I2C line so you don’t have to care about them.

The Tentacle T3 for Raspberry Pi is Open Source Hardware (OSHW). Its schematic and pcb layout are licensed under Creative Commons Attribution-ShareAlike 4.0 International. The CAD sources will be available on GitHub once we ship. 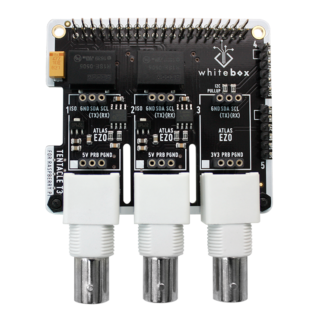 You're viewing: Tentacle T3 for Raspberry Pi $ 94.78 – $ 106.62
Select options
This website uses cookies. By continuing to browse the site, you are agreeing to our use of cookies